A long time ago I got this awesome tag thrown in my direction by Kathleen from Verbeelding. It all started on the Team Confetti blog and now I have the perfect excuse to rant about my pets. Yes, I’m talking about the Crazy Catlady Tag.

Cutest picture of your cat(s)

A picture of all my cats together is a bit impossible. Pixel severly dislikes (hates really) Loki; so getting those two in one picture wouldn’t be cute at all. So you’ll just have to do with some random cat photo’s.

Hmm, I don’t think my cats have any really special characteristics. They do typical daft cat things. Pixel loves her some cardboard boxes, the smaller the better. Schrödinger loves his humans and he doesn’t like to be alone. He calls us in the hall or when he’s walking on the garden walls towards us, like some weird form of sonar communication, hoping that we won’t go away because he’s calling out. He also loves snuggling with blankets, socks, towels or slippers if the person who owns them isn’t around. Loki likes to walk on our walls. Whenever he needs to take a turn he will, if possibele, take that turn by doing some weird ninja jump on the wall opposite of the turn. If you ever come to our house, you know now why there are a lot of muddy cat paws on our wall.

Describe the sound your cat(s) make

Pixel is a very noisy and loud cat. She miauws intensely and is a bit of a nag. She also scratches doors and makes very loud purring noises (literally she goes “priaaw”) when you pet her.
Schrödiger also nags a lot (he goes “praaauw”), but he is also a happy cat, so lot’s of spinning happy cat noices
Loki is a quiet cat, he hardly makes any real adult cat noises, he stil goes “miew” very quietly and cutely. Recently he started miewing quietly when he’s sitting at the door. Before he just sat at the door, waiting for us to magically sense he was sitting at the door and open it.

Pixel: I often call Pixel Speeksel or Speekseltje (which means Saliva in dutch), because it sounds alike. We also call her Fritsel. When we tell people about her I never forget to mention (very lovingly) she’s a bitch, because she is. So maybe that also counts as a nickname. My boyfriend often calls het “Monstertje” (little Monster).We also address all of our cats with “cat”.
Schrödinger doesn’t really have any real nickname, except from “cat”. I think it’s because he has such a long name and really he reacts to anything you say. Sometimes we call him Dikkerd (Fatty) because he is quite big for a cat and he weighs a lot (7kg!). In the past he was too fat, but he shaped up. 🙂
Loki is the only cat I never call “cat”, because I keep calling him “kitten”. I also call him Spookie (best translated as Ghost-y) and Loki-Doki.

A couple of years ago we came back from our summer city trip, only to find fleas had almost taken over our house. We let the cats sleep in our bed the first night we were back, not yet knowing they were covered in fleas, so the next day I was covered in flea bites (which I’m quite sensitive to, apparently) and we had to buy special anti-flea “bombs” to de-flea each room. Ever since we’re quite adamant on treating our cats monthly against fleas.

Buy your cats decent food (no super market brand with too much salt or strange colouring), it keeps them healthy for way longer and it’s not really more expensive. De-flea your cats every month when they go outside, you don’t want to come back from holiday to find your house covered in fleas. Also make sure you have enough litter trays (we have four for tree cats).

What kind of cat would you be?

A lazy snobby cat, I think. I wouldn’t care about what my human slaves would think about me. I’d probably avoid going outside though, climbing things and meeting other cats wouldn’t be my thing.

Hmm, aparantly I’m not much of a cat lady, since I spent very little time on cat-related sites. I do appreciate visiting I can haz Cheezburger once in a while or check the aww subreddit.

I tag everyone who has a cat and wants to spam the internet with pictures of it. 🙂 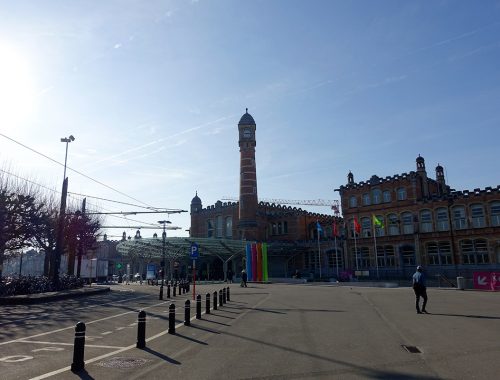