Last year, I made my first agenda from scratch. As I bound it by hand, it was a very time-consuming work, but I loved it although it didn’t fit all my needs. I needed something more flexible. So this year, I’m making a Midori Traveler’s Notebook inspired agenda for 2016.

A Midori what? A Midori Traveler’s Notebook or a Midori Traveler’s Journal is a Japanese type of notebook that consists of a leather cover and separate inner folders. The cover has at least one elastic band under which you can put a folder. Then, by means of more elastic bands or binder clips you connect all the other folders to each other. This way of putting a notebook together gives you a lot of room to make it your own. You decide how to put your notebook together and which elements it needs to contain and which it doesn’t need. When you search for Midori Traveler’s Notebook on Pinterest you can find a lot of examples and inspiration.

I really liked this way of putting a notebook together and thought it would be pretty awesome if my 2016 agenda was put together like this. I’d be able to adds lots of extras whenever I needed them (like drawing paper or extra notebooks or special to do lists) and it’d be really easy to discard of past months.

Before I start talking about how to put the cover together, let me tell you what you’ll need:

I used leather for my cover, because I wanted to make a cover that would last. When I stop using it as an agenda, it’ll make an awesome notebook or sketchbook. I bought my leather in a local shop in Ghent, called Reyne (on the Nederkouter 121). They sell their discarded pieces and scraps of leather. I managed to pick up the priciest piece in the shop. It was this thick brown leather that felt awesome and is normally used for making gear for horses. The shop owner assured me this leather would last at least 20 years and I decided to buy the piece, even though it was €20.

I know not everybody wants to use leather, so I added an alternative, leather-free, version at the bottom of this post.

Putting the notebook cover together is fairly straightforward. You start by cutting your piece of leather to size.  The inside pages of the agenda will be A5 (148mm x 210mm) so the cover has to be a bit bigger. You need to take at least twice the width of your paper (148 x 2) and add the height of your stack of folders to it (+ 35 mm) and then add some extra because your cover really needs to hang at least 10mm  – 15mm over your inside folders (+ 15mm x 2). I then added 10 mm extra for good measure.

For the height of the cover I took the height of my folders and added 12mm on each side, because that’s the point where I wanted my elastic band to come out of the cover. My final measurements for my cover where:  370mm width x 235mm height.

Draw your cover measurements on the leather. Measure twice. Then use a sharp x-acto knife to cut it out. Make sure you put a cutting mat under your piece of leather before you start.

Punching the holes for the elastic bands

When the leather is cut, it’s time to pierce some holes for the elastic bands. I decided I wanted three elastic bands in my cover. This way I could put at least three folders in the cover without needing extra materials to keep them in place and it also means I can easily fit nine folders (three per elastic band) in this cover when I use three extra elastic bands.

I only need two elastic bands for the agenda, because it consists of six folders, but I wanted the extra band for the extra materials I want to put in my Midori Notebook. Whether you want one or three elastic bands in your cover, the execution is pretty much the same.

Putting in the elastic bands

You finished your cover! In my next post you can find the printables for the 2016 agenda and all the information on how to put your agenda together + on adding extras.

I know not everybody is a fan of using leather, whatever the reason. Before I found my piece of leather I also tried making a Midori Traveler’s Notebook in an alternative fashion. I used a piece of oilcloth, some Decovil, a piece of cotton and bias binding.

I ironed the Decovil onto the cotton fabric and then attempted to glue the other side of the Decovil and the oilcloth together. I tried using Mod Podge for this, which has worked for me on many occasions, but failed me this time. It barely stuck together and I decided to add the bias tape so the pieces stayed put.

Afterwards I added the elastic band. I didn’t know it at the time, put this elastic band was a bit thicker than the one I used on the leather journal, which made putting it into place a lot harder. I wouldn’t recommend using such a thick elastic band.

If you don’t like the feel of the plastic cover or you don’t know how to sew you can also use thick wool felt. You can prepare and put it together in much of the same way as the leather cover.

If you read everything until now: wow! You really want to make this notebook, don’t you? If you have any questions or something isn’t very clear, let me know in the comments below! 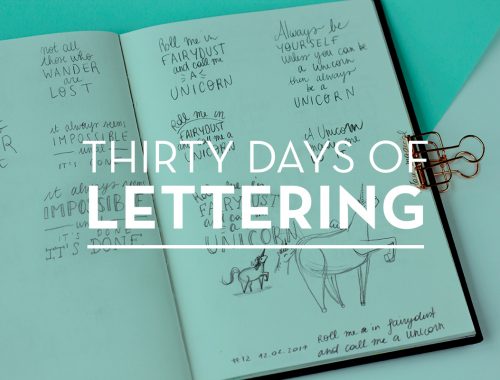