Months ago, my sister-in-law and brothers-in-law decided they wanted to run a marathon. After much deliberation they decided on the Paris Marathon and asked us if we wanted to tag along for moral support. And so we found ourselves on a quick citytrip to Paris.

I must admit after the attacks in Brussels (and in Paris before that), going to Paris when there was such a big event as a marathon scared me. I think it’s a normal emotional reaction, but the rational part in me took over (there is a chance, but it’s not that big, even now) and I stepped on the train from Lille to Paris, feeling very suspicious, but after a while, the feeling ebbed away.

To get to Paris we drove to Lille, parked our car on a free secured parking not far from the Gare de Lille Europe and stepped on the train to Paris. It was cheaper than leaving from Brussels and it didn’t took much longer to get there.

After arriving we kicked our Paris citytrip off with a visit to a museum. When we were last in Paris we didn’t get to all the museums we wanted to do, so we picked up were we left off. The Boy wanted to see the Musée de l’Armée and I tagged along (he tags along to bookshops with me), even though I had sworn not to visit any military museums for at least ten years after spending way too long in the St. Petersburg military museum (I can only stomach so many types of sables, guns and missiles before becoming extremely bored).

Lucky for me, the Musée de l’Armée doesn’t cover anything after 1900 and everything before 1900 is often made so exquisitely detailed even I can find amusing things to look at.

After le Musée de l’Armée we walked past the Eiffel Tower (buying the tiny Eiffel Tower statues we skipped on last time and regretted ever since – because apparently, having some kitschy souvenirs in our decor is our thing now) to the Palais de Tokyo.

I wanted to visit the Palais de Tokyo because I wanted to buy a specific magazine they sell (which wasn’t in stock), but upon walking into the museum I pretty much fell in love with the space and so we decided to visit the exhibitions. Some exhibitions were a bit too traditional modern art for me, but I really loved the “Double Je” exhibition, an exhibition exploring the boundaries between artists and artisans and which also gives you an insight into the workspaces and work process of the participating artists. I also really liked the colourful and often graphic work in Jean-Michel Alberola’s exhibition L’Avonture des détails.

The last thing we wanted to visit that day were Les Catacombes de Paris. The last time we were in Paris we skipped these, because the waiting line was ridiculously long. In the high season you often have to wait more than 2 hours to get inside and I didn’t want to spent so much time in line. This time the line was about half as long as the fist time we went, but we still waited for at least 1,5 hour (!) to get inside. Completely nuts.

Although I really liked my visit to the Catacombs, I think this was definitely a once in a lifetime experience: there is no way I’ll ever queue so long for them again. If you want to visit the Catacombs: go in the low season and check on which days you’ll only have to wait for 30 minutes.

After our visit we went to Montmartre to catch up with the runners of our little group and to eat some delicious pizza.

The second day was D-day for our runners: the day of the marathon. It was a beautiful day and it was suddenly really hot. We watched in amazement as over 40 000 people ran by, only catching a glimpse of our runners once. We tried to find them again a couple of times along the route, while also showing the Boy’s dad around the Paris highlights.

We caught up again with the runners at the arrival at the Arc de Triomphe, were all three of them finished! (Well done, guys!) The amount of people at the finish was just crazy and we were very happy when we finally found everybody. The conclusion at the end of the marathon was the same for all three runners: never again.

At the end of day two of our Paris citytrip we went to Chez Janou for dinner. The Boy and I discovered the restaurant the first time we went to Paris and the food was as delicious as we remembered.

On day three the runners went home early, so our ways parted. The Boy and I went to the Cimetière du Père-Lachaise, which I had never visited before. Although the Boy had told me it was a stone dessert, I thought it did have some charm. Maybe it was the early spring morning and the lack of tourists that helped to give the place some extra shine that day, although it wasn’t nearly as pretty as Highgate Cemetery (probably because there are a lot of newer graves, which just aren’t as pretty as the one they built a couple of hundred years ago).

After Père-Lachaise we walked around the Marais for a couple of hours. We visited Merci, rested in front of the Centre Pompidou, walked past the Hôtel de Ville to Shakespeare and Company.

What would my Paris citytrip have been without at least one visit to a bookshop? Ok, to be honest, I had to skip most bookshops on Paris because they only sell books in French. Shakespeare and Company only sells books in English, which is a feat, considering how proud the French are of their language.

I bought Mansfield Park in the Vintage Classics edition to add to my collection, along with Shakespeare and Company tote bag (because, really, you can never have enough tote bags) and a typewriter written poem (I got “Her Breast is Fit for Pearls” by Emily Dickinson and Sonnet no. 64 by Shakespeare).

After Shakespeare and Company both the Boy and I were spent and we dragged ourselves to the nearest cafe terrace to enjoy the nice weather and to wait for the train that would take us back home.

If it would’ve been our first time a three days Paris citytrip would definitely have been too little time to see all we wanted to see, but for a quick plunge in French culture and history, it was perfect. I definitely liked Paris more in spring than in high summer (last time we went in August), because the city isn’t smothered in tourists yet. Maybe next time we should go in autumn, I’m curious to see how fall looks in Paris.

Have you been to Paris? Which spot do I really need to visit next time? 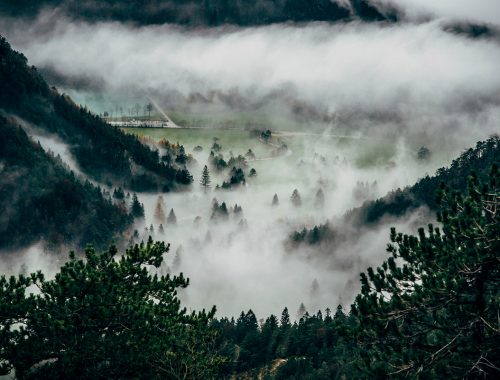